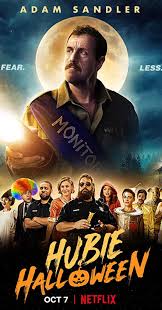 Adam Sandler delivers a new Halloween comedy “Hubie Halloween” that fails to be as memorable as his other films. Sandler’s company, Happy Madison Productions, has created huge hits such as “Happy Gilmore, Big Daddy, The Wedding Singer,” and many more. Sadly, his new addition to the production’s discography missed the mark.

Sandler plays the film’s protagonist Hubie Dubois who volunteers himself to protect his fellow Salem community members’ safety. Even with the best intentions the community repays Dubois by playing mean pranks. As Halloween approaches, Dubois finds himself in an actual murder investigation.

There were so many issues with this movie, such as poor acting, lazy writing, and no plot direction which seemed to be intentional by how the movie portrayed them. This poor execution of production could be seen as intentional, which it may have been. In an interview on the Howard Stern Show Sanders said, “If I don’t get an Oscar nomination for ‘Uncut Gems’, I’m going to come back and do so bad on purpose just to make you all pay. That’s how I get them.”

There seemed to be no direction to the plot. Characters were just added in with no context, and at the end of the movie viewers could not even remember half of the character’s names. It felt like the film was fighting with itself to try to advance the plot to the final scene. There was no dimension added to the characters giving them no depth or memorable qualities.

The biggest travesty of this film had to be the letdown of the potential it had with the all-star cast. The cast list included heavy hitters such as Kevin James, Kenan Thompson, Ben Stiller, Julie Bowen, Noah Schnapp, and so many more. The actors were done a disservice with awful writing of their characters; it seemed the script was written by elementary kids.

For being a comedy movie, the jokes come off sub-par. Ninety percent of the jokes fell flat, and the ones that did hit were overshadowed by the substandard ones. Sandler is known for his dry humor that draws audiences in because of its nonchalant manner. In his earlier Grown-Ups franchise, Sandler expertly used this form of comedy. Hubie Halloween in comparison ended in a cringy execution.

Overall, due to its poor plot structure, lackluster jokes, and underwhelming use of the cast’s talents, Hubie Halloween receives a 2 out of 5 stars. This movie will go down as Sandler’s worst project, and I do not recommend watching.