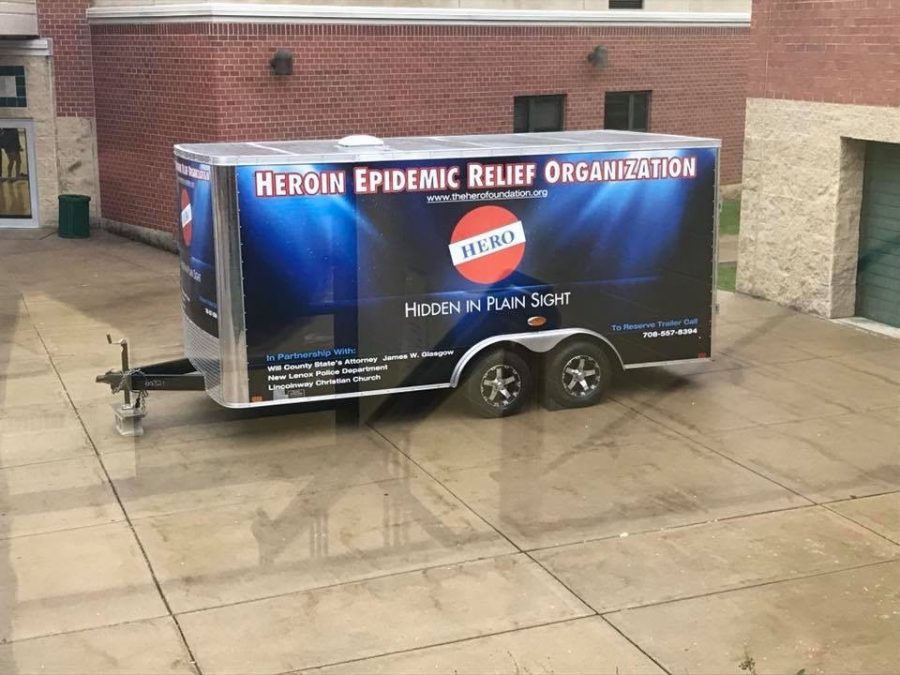 The trailer was parked outside Plainfield Central during parent teacher conferences last year, and has visited several locations.

‘Hidden in plain sight’ is a mobile trailer built by HERO (heroin epidemic relief organization), set up as a typical teenager’s bedroom that is intended to show parents all the different ways kids hide drugs.
The trailer has been set up during conferences in the past, but this year they closed the trailer for the winter, according to Josh Bloodgood, catalyst instructor. The trailer has been here twice before.
“There are various places that kids can hide the drugs. Now, they sell sweatshirts with hidden pockets and compartments, or holes on the end of the strings,” Michelle Turvey, Alanon sponsor, said.
Alanon is a support group for relatives or friends of people who suffer with substance abuse disorders or alcoholism. Turvey’s daughter, Courtney, was an alcoholic and a user from when she was 15 to 24. Many teenagers like Courtney would take drastic measures to hide drugs from their families.
“Check water bottles, because Courtney would be drinking straight vodka out of a normal water bottle and no one could tell she was drunk,” Turvey said. “You can buy shoes that allow you to open the sole and hide drugs there too.”
Along with many other parents, Turvey wishes she had known the information she learned in Alanon and in the trailer presentation sooner.
“I’ve heard from various parents that it is an eye-opening experience just as a way to see what steps kids are taking to continue to use,” health teacher, Christine Florence said.
The effect of the trailer may help minimize the number of teenagers who end up in the same boat as C. Turvey, who to this day goes to AA (Alcohol Anonymous) meetings. She is a sponsor for Alcoholics and users today and helps many kids overcome their addictions.
“I think the whole idea [of the trailer] is great, because parents have no idea what their kids get away with,” C. Turvey said. “Parents are just clueless.”
In addition to the trailer, students have been provided with similar details when John Roberts and Kim White visited the sophomore health classes on Oct 24 and 25.
“John Roberts, the creator of HERO, told the story of his son, Billy dying from a heroin overdose. Billy stayed back to use, while his friends went to a ball game,” Florence said. “When they came back, they found him not breathing and immediately called an ambulance and Roberts.”
Roberts explained how he and his wife had many troubles overcoming their loss, but they both have pushed through in their own ways.
“He put this organization together as a more manly way of dealing with the loss of his son,” said Florence. “Instead of dealing with his emotions on his own, he felt he needed to bring awareness to it.”
White also told of a son who died from being involved with drugs.
“Kim had said her son was very athletic, into sports, lifted weights, worked out and was very involved in his own well-being,” Florence said. “Then when he went to college, he went through depression and was having a very hard time being on his own and away from his family.” Not long after, her son began to use.
“He started to withdrawal and got mixed up with people who use,” Florence said. “He began using that as a way to cope.”
According to Florence, White was very shocked at the thought of her son even being involved with drugs or people who use.
“It was so unexpected, and you couldn’t just assume,” Florence said. “You can’t just look at someone and know they’re on drugs.”
The Hidden-in-place project shows places and ways kids hide their drugs, but the problem isn’t only the access to the drugs, it’s also the worry of people knowing they have a problem. They don’t want people to know there’s an issue, but the issue can extend beyond just the drug itself.
“One of the big things Kim talks about is the purity,” Florence said. “You don’t really know what is in it. So, now you’re taking substances which could be something as simple as marijuana, but that marijuana could be laced with fentanyl.  In two little grains of salt, could be enough to kill you.”
According to Florence, White said they did an examination on what killed her son and found lawn fertilizer laced into the heroin.
“It’s not about trying to freak you out by all those people dying,” Florence said. “It’s about the education piece with everything that we talk about with health, with mental illnesses, etc. It’s simply awareness and knowing it’s there.”
Florence explained how many kids tell themselves ‘It won’t happen to me’ and yet it happens more than they know.
“Drug use can happen to anyone at any time. Even the parents that constantly tell their children ‘Don’t do drugs’, ‘Stay away from drugs’, ‘Just say no’. Those parents even think their child would never do it because they told them so,” Brian Bazan, health teacher said.