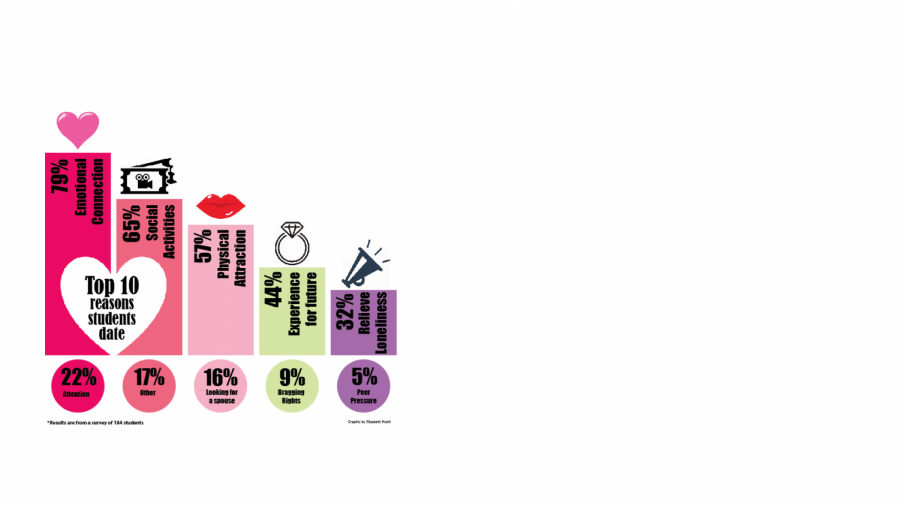 A tearful audience watches the monumental moment. They know Rose is going to let go, but they hope that she won’t. To be together, Rose stood up to her mother, and Jack confronted her crazy ex. They were going to defy society and move to Wisconsin together. Never mind that they only knew each other for three days, they loved each other… right?

For the teenage girl tearfully watching Rose and Jack’s story unfold, their relationship is a dream of love at first sight. But for the real people who might’ve lived through the Titanic, it is quite the opposite. Over the course of the past century, the way people approach and define relationships has entirely changed.

Recent years have seen a strong movement away from family-oriented relationships. According to US government census, the median marriage age has risen from 25.3 in 2003 to 29.8 in 2018.

“There’s a lot less stigmatism with marriage and family and the idea of women only taking care of kids,” senior Claire Culbreth said. “I feel like it’s more acceptable now for everyone to go at their own pace.”

While the median marriage age has continued to rise, it does not mean that there are less young adults in relationships. Between being single and getting married, younger generations have the option and time to date around before fully committing to something.

Although the dating process has become more carefree, many teens who are in a relationships face complications brought on by the turbulent period of adolescence. For Culbreth, who has been in a relationship since middle school, being in a long-term relationship throughout high school has meant maturing together with her significant other, senior Max Navarro.

“Teen relationships are not easy,” Culbreth said. “Kids are constantly changing, and so to be able to change with someone is very difficult. When you’re in a relationship, a lot of times you have to work and come up with something that isn’t always about you. ”

The time spent in high school marks a sensitive period of growth for teens and being in a relationship during that time can significantly impact personality, maturity, and perspective.
“Especially if your significant other is mean to you or abuses you mentally or physically then that’s how you are brought up basically, and that’s all you know,” Illibasic said.
When healthy and taken seriously, relationships can also become a major source of emotional support. Senior Patrick McCormick, who has been in a relationship for two years with senior Angie Vascik, has found that dating in high school helped in the process of growing up.

“As a guy, sometimes it can be weird to talk with your friends about deep stuff, but it’s good to have someone to talk to and support you and understand from a teenage standpoint, because parents don’t always understand,” McCormick said.

While the pressure of marriage and family has been offset, many people may feel rushed to get into a relationship. Social media culture especially demands that teens place their lives in a public space, and with platforms such as Instagram, Snapchat, and Facebook, sharing relationship experience with others becomes as important as the relationship itself.

“I think a lot of people think of relationships as a status kind of thing,” senior Angie Vascik said. “If you’re dating someone, instead of looking at it as a relationship, it more just like you have a boyfriend rather than being with a boyfriend.”

Particularly with high school students, being in a relationship can complicate a teen’s post high school plans. Senior Lexi Moisan has been in an extended relationship with her boyfriend who left for college last year.

“In the back of my mind, there’s always that part that doesn’t want to be too far away, but I feel like I’ve put my goals first, and I think that’s important in relationships,” Moisan said. “It’s important to keep in mind what you want to do because you never know what might happen to your relationship in the future.”

Although most high school students approach dating as a means of having fun or experimenting, relationships can develop that make a difference of a lifetime.
“Patrick’s point is if it’s really meant to be then it will happen,” Vascik said. “We are not pressured to stay together, it’s more like if it’s going to happen, it’s going to happen.”