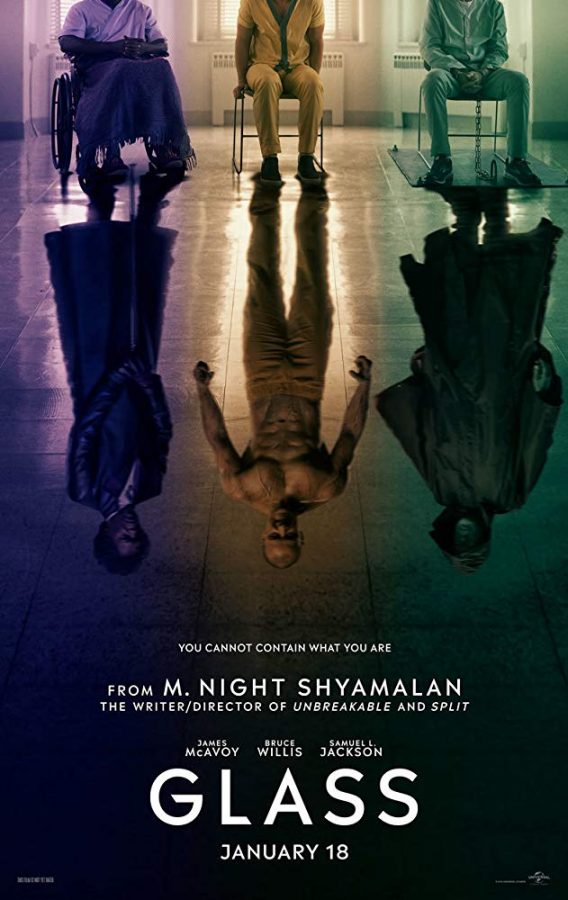 If you were looking for a great continuation of the psychological and supernatural thrillers leading up to Glass, you’ll be left aggrivated and disappointed+.
Glass completes a trilogy with the killer thriller Split and superhero themed film Unbreakable. The movie brings together three narratives, a man with multiple personality disorder, a man who despite his physical weakness and disablities is very intelligent, and a man who uses his superhero abilities to fight crime and be the town’s local vigilante. However, due to the reveal of all three’s criminal activity, they’re all sent to a private asylum built for them and are to be treated by a doctor that tries to convince them they do not have superhero abilities.
The cast is made up of amazing, well-known actors such as James McAvoy, Samuel L. Jackson, and Bruce Willis to play super villain-like characters against society. They all accurately portray their characters, especially McAvoy who has to continuously change his personality throughout the entire movie.
M. Night Shyamalan, filmmaker and actor, despite being well-known for his supernatural plots and storyline twists, he did not deliever this time. His last movie, Split, which was a prequel to Glass, did very well in the box office for it’s realistic psychological thriller plot that brought the movie to life. However, his attempts to transition and connect his three movies together ended up lacking in many entertaining factors of a thriller.
The pacing of the movie was aggriativingly slow. Most of the movie was trying to catch the audience up to date with what had happened since the last movie, and what was not happening, filling in bits along the way. The movie also had very little action, and the little there was came in odd distributions that made it hard to be entertaining after being overwhelmed by all the new information to take in.
What irritated me the most was that they took a serious personality disorder and turned it into an unrealistic superpower, called “the beast,” that wasn’t featured until the end. Although this techinque allowed the audience to sympathize with the characters’ realistic situation, it took away the believable aspect.
However, the comedic bits were very entertaining. McAvoy did very well controlling the overall tone of the scenes, and when things were too tense for a long period of time, he’d whip out a line that’d make the whole theater laugh or at least chuckle a little.
Overall, I’d rate this movie 3 out of 5 stars because despite the drawbacks, it still carried some good elements from the past movies.