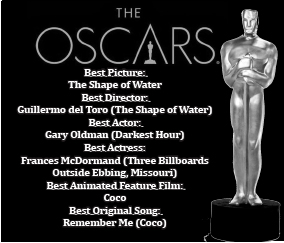 The 90th Academy Awards, also called the Oscars, is one of the most prestigious awards someone in the movie business can win. It is an extreme honor just to be nominated for one of the 24 awards, and for students involved in drama and design, it represents future possibility.
“These people have put an extreme amount of effort into their performance or area of work on the production,” drama club member, Lily Danner said. “Having taken part in productions before, I know how rewarding it is to be recognized for your work.”
The award received for winning a category at the Academy Awards is the Oscar Statuette. Its real title, however, is the Academy Award of Merit. This famous statue displays a knight holding a sword who stands on a reel of film with five spokes in it. Each spoke represents one of the original departments of the Academy. These include the Directors, Actors, Producers, Writers, and Technicians.
“It’s cool that there’s so many things that are represented. There are some many different categories and people that won the awards” junior and thespian, Maggie Dix said.
“Movies in general have always caught my attention and fascination because they are so much more than the actors and actresses,” senior and Drama Club President, Mikayla Icenogle said, “The Oscars symbolize the people behind the scenes we take for granted when we watch the movies.”
The Academy Awards is the oldest entertainment awards ceremony. It began in 1929, with 15 statuettes awarded to different participants in the film making business. Being historical, there are backstories to the traditions.
The sealed envelopes: This tradition started in 1941. Before then, the newspapers were given the results of the awards at 11 pm on the night of the Oscars. However, The Los Angeles Times released the winners before the ceremony even occurred. Thus, sealed envelopes are now used to make sure that the winners remain a secret until the results are officially announced.
The official name Oscar: The name was given sometime around 1935, over 5 years after the first awards ceremony. The most well known theory, according to The Huffington Post, is that a columnist named Sidney Skolsky got bored of repeatedly calling the statue, “The Gold Statue of the Academy,” and dubbed the statue Oscar. He got the name from an old Vaudeville Joke where the character, named Oscar, was the punch line.
Another person who swears they named the statue was Margot Herrick. She was the Executive Secretary of the Academy at the time and said she named it after an uncle. Bette Davis, an actress, said she named her statue Oscar, after her husband who resembled the award.
Award presentation: This has evolved over the years by the addition of new categories and the rearrangement of the order of awards. In 2002 the Academy Award for Best Animated Feature was first presented. While ever since 1973, the ceremony has always ended with the Academy Award for Best Picture. Although the awards always stay creative and fresh by having different hosts, there is one tradition that usually stays relevant. The actors present the awards to the actresses and the actresses present the awards to the actors.
“It is a great way to acknowledge an actor’s talent and hard work,” junior and Thespian, Casey Osaka said.